Ryan has more than 17 years’ experience in the construction industry, including over a decade working on various forms of the NEC contract.

He has worked across sectors including retail, social housing, stadia and residential as well as commercial offices, aviation, rail and design. His experience includes work on landmark projects, such as Westfield at White City, the London Olympic Games and the redevelopment of Heathrow Terminal 2.

Prior to joining MPG, Ryan was a commercial manager with Atkins, and previously worked as a senior cost engineer and contract administrator with Crossrail on the Bond Street station project and with Morgan Sindall as commercial manager for MEP and fit out of Crossrail stations. 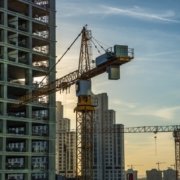 As construction contracts get more complex, our new report shows you how to protect your interests

With construction disputes on the rise, it is vital that contractors understand how to protect their interests. Our study explains how to get to grips with sweeping changes to standard contracts commonly used in the UK and the Gulf region.

The 20-page report titled ‘Construction Claims and Defence’ also looks at global claims, a means of getting compensation in a dispute even when the circumstances aren’t crystal clear.

Our managing director, Michael Gallucci, says: “The construction sector in the UK is awash with disputes and legal claims. A healthy reaction to that is that organisations are increasingly using standard contracts that are better suited to higher value, collaborative projects. Figures suggest an increase in the use of NEC and FIDIC contracts with use of JCT contracts declining. Having said that, these are complex instruments made even more complex in the way they can be interpreted and implemented by different jurisdictions and in different contract agreements. The comprehensive update to the FIDIC Yellow greatly extends its coverage and makes it even more important that contractors and engineers have comprehensive and well-managed programmes in place.”

The report outlines the changes to FIDIC. It includes sections on concurrent delay principles and implied terms regarding prevention. The report explains when and how to make a claim under the contract and when to claim for breach of contract. It also looks at extension of time assessments, claims for additional payment for prolongation and claims for disruption and acceleration costs.